Kanye West might be changing his album title… Again

Kanye West is at it again everybody. After changing the name of his upcoming album twice already, he teased fans Monday at 1:30 a.m. with a tweet saying he may have a new secret album title for his upcoming release.

At this point, fool me once Kanye, shame on you, fool me twice, shame on me, fool me three times—well that’s a little excessive. Quickly Yeezy’s becoming “the boy who cried album title,” as he seemingly can’t commit to one.

This all began on February 28th of last year when West tweeted his upcoming project would be titled So Help Me God. Then, just three months later, West tweeted the album had switched its name to SWISH.

For a while, people thought there wouldn’t be any more changes, especially with the LP rumored to release the summer of 2015. However, after the album didn’t end up dropping and West told popular magazine Vanity Fair he thought the album may be a year away— all hope seemed lost.

Then on January 26th 2016, West tweeted he changed the album title again to WAVES and shortly after announced the LP would be dropping February 11th.

A couple days after this news, West and Pittsburgh rapper Wiz Khalifa got into a twitter feud culminating into a long rant from West and an appearance from West’s ex and Khalifa’s ex-wife Amber Rose.

Which brings us here, as West may change the title yet again.

At this point, West may just be trolling the masses— as he tends to do. However, if he is serious about another change, I think this tweeter sums up our thoughts perfectly. 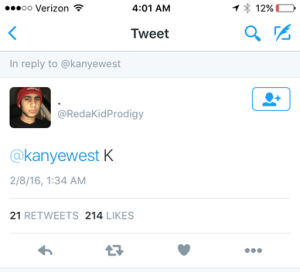 Editor’s Note: West just unveiled that his upcoming album will be called The Life of Pablo. Earlier this week, West revealed that his album would sport the initials “T.L.O.P.” He also offered any fan who could guess the acronym a pair of Yeezy shoes and tickets to the Yeezy season 3 fashion show. Also coming with the announcement of what the initials stood for was a final version of the track list, which interestingly didn’t include the song “No More Parties in L.A.” “No More Parties” was on earlier versions of track lists and on the song West sings “I feel like Pablo.”

West didn’t reveal what Pablo he is talking about, causing fans to speculate whether or not it refers to poet Pablo Neruda, notorious drug lord Pablo Escobar or some other Pablo. Most seem to agree it refers to artist Pablo Picasso, whom West cited in a 2015 Oxford University lecture he gave. West is set to host a listening party tomorrow at 4:00 p.m. EST at Madison Square Garden. The event will be live streamed for all members of the music service Tidal.